Embrace Work As A Calling 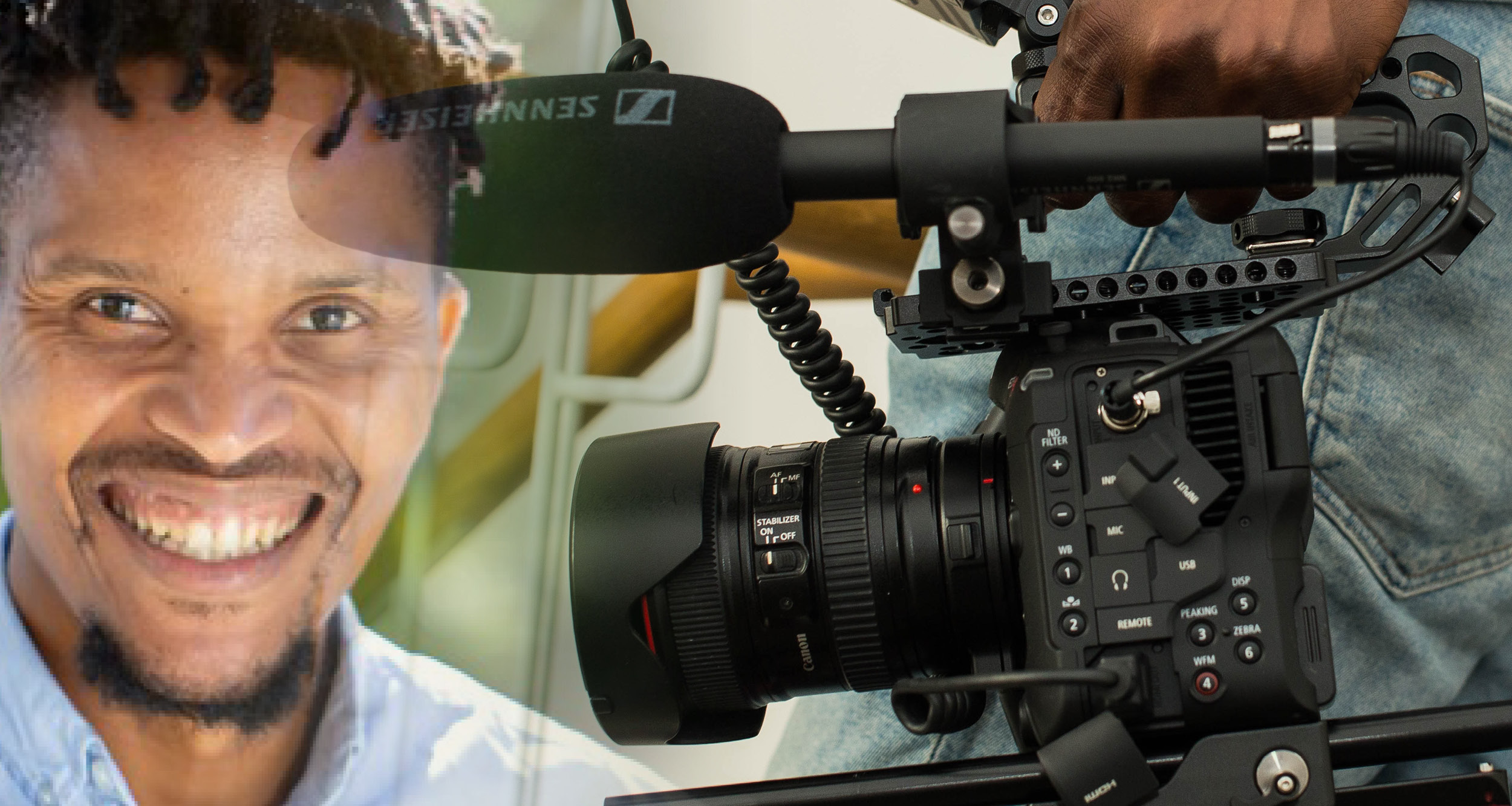 Sammy Rabolele co-founded the Beyond The Eyes Network in 2014. They help organisations tell their stories to stakeholders and broader communities – in a way that changes relationships for the better, and testifies to the glory of the gospel. This is a summary of his interview with Ziwani’s Sibs Sibanda.

“Everything is sacred,” says Sammy Rabolele. “There is no separation between the sacred and the secular.”

Sibs Sibanda agrees. They are exploring the redemptive role business can play in bringing about social justice in South Africa – where social justice refers to the equitable distribution of all opportunities, resources, benefits and burdens in a society. “But we cannot begin to think redemptively about the role of business in social justice until we embrace business as a calling, not just an occupation,” asserts Sibs.

Sammy briefly traces his own journey of finding his calling as a filmmaker. “Even though I wasn’t aware of them at the time – when I look back, I can identify the influences that eventually drew me into the media and entertainment industry. My father worked for Bop TV, a broadcasting service that launched in Bophuthatswana in 1984. That obviously created some sense of familiarity. While studying finance at university, I worked in a video store (remember those?) and I was always up to date with the new releases. And one of my best friends, Tebogo, went to film school. We kept having passionate discussions about story, and its power to influence society, and how we believed God was calling us into that world.”

Eventually, they had to confront the burning question, “Are we going to jump in and trust God?” So they did, and eight years ago founded Beyond The Eyes Network. “We are really grateful for our wives!” Sammy exclaims. “They supported our vision and carried us financially in that start-up season.”

“Why did you call your business Beyond The Eyes?” asks Sibs. “Well, the gospel makes us aware of a world beyond what we can see with our physical eyes,” Sammy responds. “All of us are born into, and find ourselves living in, a world that can be very harsh. Sometimes people lose hope. We want to tell stories that inspire people to look for beauty beyond their immediate circumstances, and find courage and purpose for the future.”

Many Christians struggle to see the relevance of their daily work to the kingdom of God – sometimes even thinking they should quit and go into ‘full-time ministry’ if they really want to ‘serve the kingdom’. Sammy’s journey, however, is the opposite – he worked as a missionary on campus before going into media and entertainment. “So you started in ministry and then went into business?” Sibs comments. “To some this might seem like going from a noble calling to just a regular job – how did you process this move in a theological sense? In what ways do you see yourself as still serving God in and through your work?”

“Actually, working in so-called full-time ministry on a university campus gave me a clear view of what it means to have a marketplace calling,” Sammy explains. “Most of our efforts were focused on preparing young believers for their careers. The frontlines were in the hearts and minds of these students – who had to figure out what it means to love God and love people in and through their Monday-to-Friday work life.” Sammy quotes John 17:15–18, stating that Jesus’ prayer still applies to every believer: “My prayer is not that you take them out of the world, but that you protect them from the evil one. They are not of the world, even as I am not of it… As you sent me into the world, I have sent them into the world.”’

Yet being in the world and not of it, is easier said than done. “Having studied finance, do you think your work as a storyteller lends itself more easily to embracing a marketplace calling, than for example, bring a banker?” prompts Sibs.

Sammy acknowledges that, on the one hand, it is probably easier. “Storytelling is fluid and subjective, and can be crafted according to our purposes, whereas it can sometimes be difficult to see how to bring glory to God in an industry as highly regulated as finance. What also makes it easier for us is that we run our own company. We have the freedom to intentionally tell stories that reveal a divine Creator at work in the world. But I think all believers should have a deep-rooted conviction that their work is an act of worship, and that it is for the common good – then we can all live out Paul’s encouragement to do whatever we do for the sake of Jesus, while giving thanks to the Father (Col. 3:17).”

On the other hand, bringing glory to God can be incredibly hard to do in the media and entertainment industry. Funding is often driven by an ungodly narrative, and opportunities are controlled by powerful gatekeepers who push a distinctly anti-Christian agenda. Sammy explains, “Securing funding can be a real challenge. We had to find a way to navigate this, and started building partnerships with Christian businesspeople who are outside the normal funding channels. Our current projects are financed by individuals or organisations who buy into a particular story, because we haven’t yet grown to the place where we can raise funding as an investment that will bring about financial return.”

He continues, “We are always on the lookout for entrepreneurs who are doing well, for people who are doing amazing things in their communities, and whose stories deserve to be told. These don’t need to be overtly evangelical – they can simply be wholesome stories of courage and hope. We love producing stories that show how the actions of one person can have a big impact. For example, a teacher who sacrificially turns around the lives of learners at a school. In every human story, we can find evidence of the divine in the mundane.”

He insists that they don’t, however, ‘sanitise’ stories to fit a superficially religious narrative. “Life is messy, and we want to tell real stories in an authentic way. Many stories in the Bible are difficult to tell, for example David committing adultery and murder, and then having to flee from his own son. We might cringe, but God doesn’t sanitise it.”

Sibs picks up on the theme of sacrificial living: “Is there a call to sacrifice within embracing business as a calling? For example, do you sometimes have to forgo certain projects, that would pay you well, but don’t align with your values?” This is a tension that needs to managed by all creatives, not only believers. Sammy and his team have found a way around it by initiating the bigger projects they want to pursue, rather than positioning themselves as a production team for hire. “Though there is often a fine line when producing TV ads,” Sammy concedes.

Bringing the conversation back to social justice, Sibs affirms that we are all uniquely positioned to develop some aspect of creation for God’s glory, and for the flourishing of society. “To what extent do you think the local film industry has engaged with issues of injustice? I am not referring to documentaries about under-privileged communities that expose the problem or allocate blame. I’m referring to narratives that would actually stir those who watch it, to think about what redemption might look like. We need stories that not only make people aware of the problems, but spark their imagination to get involved,” he states.

Sammy agrees, “The truth is that we have a long way to go, but that is exactly where we need to focus our storytelling resources. In South Africa, we mainly consume American content that champions their narratives. Other regions, like India, create a lot of content that deliberately engage issues facing their society, for example, the perceived shift in roles played by men and women in family life. Why don’t we tell more of our own stories? I’m a Tswana, and our word for neighbour is moahisane, which means ‘a fellow builder’. Simply by virtue of my language, I understand that my neighbour isn’t simply the person living next to me – we are fellow builders of our community. This is such a rich worldview that could really bless others.”

Sammy concludes, “So although justice is a very difficult topic to engage, it is at the very heart of God. God cares deeply about justice, and sadly, we have left it to secular filmmakers to figure out. We have the gospel, we have the good news! Without sanitising the stories, we need to present a picture of what justice could look like, and offer hope for the future.”