Why Nations Fail – The Origins Of Power, Prosperity And Poverty 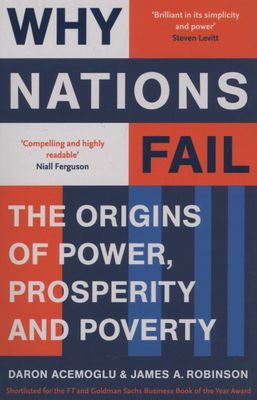 First, a disclaimer… For years I avoided reading Why Nations Fail simply because of its title. It was first published in 2012, and for a South African it simply cut too close to the bone of our political and economic landscape. Similar to many countries in Africa, we do not have the luxury of engaging with “the origins of power, prosperity and poverty” as an academic exercise – we are currently caught up in what the authors refer to as “a critical juncture” in history.

And this is precisely why you should read this book. As the 2010 Nobel laureate in economics, Peter Spence commented, “This is important analysis not to be missed.” The point is that the “great differences in world inequality are evident to everyone” – but why have some countries managed to achieve higher levels of prosperity, while others have consistently failed?

Acemoglu and Robinson insist that previous explanations, which focus on differences in geography and climate, or culture and religion, or the perceived ignorance of the elite, are insufficient. They trace the histories of people groups in both the ancient and modern world though major and minor events that, in hindsight, determined the direction of their development. Based on 15 years’ research, they are convinced that the emergence of prosperity and poverty rests upon the interplay between political and economic institutions.

This argument makes intuitive sense. A country’s institutions are either predominantly extractive or predominantly inclusive. In an extractive environment, the elite design economic institutions and political processes in order to enrich themselves and perpetuate their power, at the expense of the vast majority. In an inclusive environment, a broader distribution of power enables genuine participation in political decision-making, provides constraints against the abuse of power, and creates incentives for sustainable economic growth.

Inclusive environments typically feature secure property rights, an unbiased system of law, a strong civil society, a free press, reliable infrastructure, the enforcement of law and order by the state, as well as the provision of public services. There is a (mostly) level playing field that permits the entry of new businesses and encourages innovation. Extractive environments typically feature the opposite, and stifle the engines of prosperity – why generate wealth if you suspect you will be plundered by the powerful?

Yet history has shown the tremendous impact ordinary people can have, when they effectively organise against the slippery slope of power grabs. Read this remarkable book and start thinking about how you too can play a transformative role in building a more prosperous future on our continent. History is not destiny – at the right moment, one small act can tip the scale.